This video proves that sometimes doing things without a professional roofer is a very bad idea!

A little roofing humor, but we are raring to go now that spring is here!

‘Tis the season for great Santa based jokes – and here is a great cartoon that combines our love of the holidays AND roofing!

Here is a little roofing humor for you for the weekend from the guys at CollegeHumor.com – and it stars Law & Order: SVU’s own Christopher Meloni.

For Hump Day, we thought we would share this hysterical video! Remember, do not taunt workers in heavy machinery… 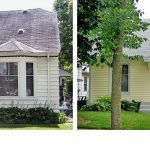 Who says contractors don’t have a sense of humor?

Someone spotted this work van and thankfully snapped a picture so we can get a good laugh.

Wondering what to do with all those old LP’s that you have or inherited? Well, Matt Glassmever had an idea for his 350 records that he had laying around. He used them to roof his porch. Matt was met with many skeptics when people saw what he was doing, but says that he had left 100 records outside for two years and they faired well with no deterioration, other than the labels peeling off. Each album has a nail and a washer in the center whole to secure it and to keep them from leaking. It may not be too pretty, but it works. Looks like Matt has come up with yet another way to be green! LOL!

Own a piece of the roof that noone likes.

Did you know that you can own a piece of the teflon that was the Metrodome roof, before it collapsed in 2010?  Yes, believe it or not people are paying about $10 and up for a piece of the roof that collapsed in that December snow storm of 2010. There are a few different variations that you can get too. Such as a Joe Mauer plaque with his #7 cut out of the roof teflon, mounted next to his baseball card on wood backing. How about a Authentic Teflon printed Vikings football with purple printing on it, or a 1987  “Domer Hanky” cut out of the teflon roof? In all there looks to be about 27 different pieces that you can pick up in all price ranges. Hmmm, maybe for a good gag, you should send a piece of the roof over to that buddy of yours who can’t stand the dome. LOL!

Two rookie roofers are up roofing a home.  The first rookie pulls out a nail and then hammers it into the roof. Then he pulls out another nail, looks at it, then throws it over his shoulder. Rookie #2 eventually saw what Rookie #1 was doing, watched him a while and then said, “Why do you keep throwing out every other nail?” Rookie #1 replied, “Because their points are on the wrong end.” Rookie #2 then said, “You airhead, those nails are for the other side of the roof!”