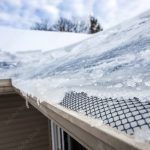 After a home is damaged by a weather-related event, the owners may want to file a claim with their insurance company for the cost of repairs. Not all events are covered, however. Before choosing a home insurance policy, men and women should become familiar with which types of damage the companies generally will pay for and which they will not. In cold parts of the country, ice dams are a major concern.

These formations accumulate on top of rain gutters and the edges of roofs during thawing and freezing cycles. Snow slowly melts on the roof, and then the liquid freezes in the gutters. The resulting accumulation of ice can become very large and heavy. Water may seep under the shingles, causing damage inside. If the ice becomes heavy enough, the gutters may pull away from the building and collapse. 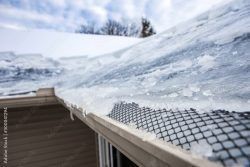 Ice dams cause millions of dollars in damage to homes annually. The problems are most prevalent in regions that typically see a large amount of snowfall, but ice dams can occur anywhere after a snowstorm drops several inches on rooftops.

In fact, homes in milder climates may be more vulnerable because the owners are unprepared. In colder regions, homeowners may have taken precautionary measures like placing electric heat cables in the rain gutters before winter arrives. Those devices can be plugged in to melt ice as it develops. Residents of these areas also know they must have the roof raked or shoveled after large amounts of snowfall to prevent problems.

The willingness of insurance companies to cover damage caused by ice dams might be considered unexpected since, theoretically, these stalactite-producing structures should be preventable. It’s similar to the way home insurance also covers damage caused by plumbing pipes freezing in bitterly cold weather.

The insurer typically does not pay for ice dam removal, though. Sometimes this turns out to be emergency service provided by a roofing contractor when the household residents see water leaking into the building.

The policy may cover damage to the roof and any interior structural issues caused by water getting inside. However, it might not cover damage to possessions like furniture or electronics.

Although homeowners can have their insurer cover the expenses associated with an ice dam, nobody wants something like this to happen. One point to consider is that homeowners still have to pay for the deductible amount on their policy. The deductible is commonly as high as $2,000, and usually is not lower than $1,000. They should take preventive measures in the future, such as installing heat cable and using a roof rake.

Ice dams can result in serious damage if they become large and heavy enough. These weather-related events cause millions of dollars in residential repair costs every year. Prevention is the best strategy, but homeowners can expect their insurance policy to pay for expenses beyond the deductible if a problem does occur.